Using a dynamic routing protocol in a network today is a common routing strategy for providing full network connectivity in enterprise environments. Simultaneously, it has many advantages over static routing and brings many additional benefits, especially in medium to large networks.

However, there are several dynamic routing protocols available on the market, and choosing the most appropriate one is essential. Which one you choose depends on many different criteria such as the size of the network, the topology used, the presence of redundant links and equipment, the types of applications running, and similar related criteria that might be crucial for the protocol selection.

Check out some of our past routing protocol configuration guides:

Before we dive into the characteristics, features, and behavior of each protocol, we must first understand the differences between the dynamic routing protocol types. 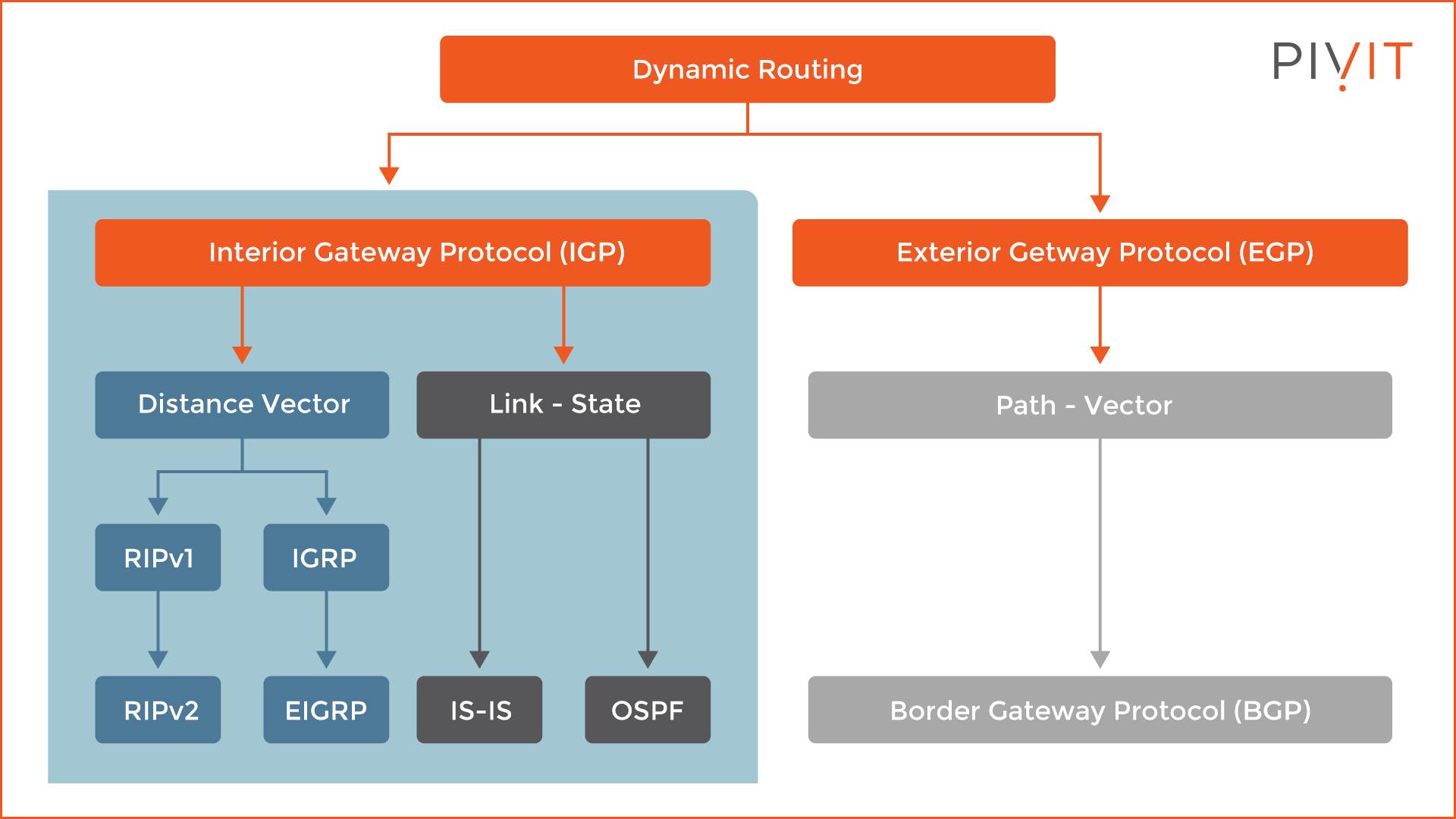 Distance vector protocols determine the direction and distance to any link in the network. The way they learn about parts of the network is based on rumor because each router learns only from directly connected neighbors, instead of the source where the information originated.

Therefore, when a router sends data to a certain destination, it only knows the exit interface that should be used and how far the destination is but contains no knowledge about the full route that will be used.

In contrast, link-state routing protocols learn network information from the source, instead of from the neighbors and always know the exact route that will be used when packets are sent to a certain destination.

Get help choosing the best router for your network by viewing our comparison between the Cisco ASR and ISR Series.

Differences and Similarities of the Routing Protocols

Although all internal routing protocols have the same goal, which is learning about different parts of a network, they do not use the same approach or follow an identical behavior. For that reason, we will look at various individual characteristics of each protocol to determine the most suitable one in certain use cases.

Configuring RIP is a very easy process and does not require any special knowledge to implement. All you will have to do is configure a few commands on the Layer 3 devices (usually routers) and your network should become functional.

Likewise, EIGRP supports easy setup, but it is a little bit more difficult than RIP because of the additional features it supports and the more advanced approach it uses.

On the contrary, both OSPF and IS-IS use the same algorithm, so their procedure is quite similar. However, compared to RIP and EIGRP, the setup itself is more complicated, and additional recommendations must be followed to properly implement them.

When using RIP and EIGRP you do not have to be afraid of new routers that are connected to the network. Their approach is very flexible, so you can add additional routers whenever and wherever you want.

To a certain point, IS-IS is similar to these two protocols, but not at the same level because of the more challenging implementation approach. OSPF is quite rigid regarding its design and, therefore, it is important to have a proper network design in place before implementing OSPF.

RIP is designed in a way that allows it to be used only in small and simple networks. At the same time, RIP is considered a legacy protocol according to today’s standards because of the limitations and drawbacks it has. After all, RIP was developed a very long time ago, when networks were extremely simple, and different criteria were sufficient for proper routing.

EIGRP and OSPF are the best choice for medium to large networks, even though OSPF is a better option because it has been a standard routing protocol for a longer period.

Although IS-IS is using the same algorithm as OSPF, it uses a different configuration approach and is designed for extremely large networks. Usually, you will see IS-IS implementation in large service providers.

Don't let unreasonable lead times stop you from getting the routers you need. PivIT gives you the freedom to choose from an extensive network of OEM partnerships, maximize your budget, and create a strategy to keep your network scalable.

Updates play a key role in the learning process of the networks, so it is quite important how each protocol approaches this matter. RIP sends updates every 30 seconds by default and this method consumes a lot of unnecessary bandwidth and processing resources.

On the other hand, EIGRP, OSPF, and IS-IS send trigger updates only when there is a network change, and this results in more optimized routing. On top of that, OSPF routers exchange a summary of the routing table every 30 minutes, as additional database synchronization.

When a network change happens, routers must quickly adapt to those changes, so you will not experience any network connectivity problems. However, not all routing protocols react in the same way.

RIP, for example, is the slowest because of its old design. On the contrary, OSPF and IS-IS are considered to have fast convergence by default and with additional tuning, they can converge even faster.

By far, the winner in this category is EIGRP because of the diffusing update algorithm (DUAL) it uses and its unique approach that allows extremely short convergence times when some requirements are met.

For additional redundancy and bandwidth, you can always use load balancing. For that reason, all routing protocols support equal load balancing that allows several equally valued routes to a single destination network to be used in the routing table at the same time.

However, EIGRP goes one step further and supports unequal load balancing that allows routes with different metrics to the same destination to also be included in the routing table. By default, this feature is off, but you can enable it when needed.

Because of the IPv6 popularity, all routing protocols were either modified or evolved into new versions, so all of them can function within IPv6 networks.

However, there are some differences regarding the configuration approaches used by each of them, but in the end, they all function similarly as they do in IPv4 networks.

One of the disadvantages of using a dynamic routing protocol is the additional consumption of CPU, memory, and bandwidth. Therefore, it is important to be familiar with the resource efficiency of each type.

RIP is the least efficient protocol because of the way it functions when sending updates and performing convergence. OSPF and IS-IS are more efficient and satisfy today’s standards and can even be improved with additional tuning.

EIGRP is the most efficient routing protocol due to the way it was constructed to function when certain requirements are met.

RIP and EIGRP are routing protocols that you will seldom see being implemented in a service provider. OSPF is the common choice for internal routing inside service providers, while IS-IS is the preferable option for extremely large provider networks, where flexibility is important.

It is a fact that OSPF is the most popular routing protocol today, not just in enterprise networks, but in service providers as well. The big brother, IS-IS protocol, will most likely never have a chance against OSPF or EIGRP as a routing option for a production network.

RIP hand is rarely used because of its limitations, while EIGRP is the most popular in networks with Cisco equipment, although it has been standardized several years ago.

Protect your new or legacy routers with PivIT's OneCall service. Get coverage tailored to your networks and have complete peace of mind knowing that when something happens, it will be handled right away. View our OneCall offering here.

It's Time to Decide

As you can see, prior research of a routing protocol is required before you can decide on the best option. OSPF will most likely be the winner for most use cases, but, depending on certain criteria, EIGRP might be implemented as well.

RIP is the least used protocol, and, except for being used in small networks or some unusual use cases, it will never be a preferred choice. Finally, IS-IS, with its unique approach and addresses that it uses, is an appropriate solution for extremely large networks, but not the best fit for everyday networking.

Still not sure which routing protocol to use in your network? Send PivIT a request or connect with our Team in real-time using our chat feature. We are ready and waiting to help you make the best possible decision.